Cohen Gallery is pleased to present an exhibition organized and curated by Professor Karen Donnellan highlighting the possibilities in cast glass. 5 artists, in varying stages in their careers, all affiliated with Alfred University are brought together in the Cohen Gallery’s Alumni Gallery. The exhibition entitled Saying Glass will be on view in the gallery from January 24- February 23, 2020 with an opening reception on Friday, January 23 from 5:00 pm - 8:00 pm.

Saying Glass brings together five artists with diverse practices in glass casting and kiln forming. Their works span in form from the gestural and experimental, to the meticulously crafted, and engineered. This exhibition reflects the far-reaching edges of the visual, material, and conceptual potential, in glass today. Our title references artist Roni Horn’s extensive meditation on the element of water.

Karen Donnellan (b. Wicklow, Ireland) is currently Assistant Professor of Glass and Director of the National Casting Center glass facility at the New York State College of Ceramics, Alfred University. Her work is held in public and private collections and has been shown at venues internationally, including the Corning Museum of Glass; the Irish Museum of Contemporary Art; Tushanwan Museum, Shanghai; and the National Glass Center, Sunderland.

Joanna Manousis (MFA ’12) is a British–American artist working in glass and mixed media. Her work has been recognized with nominations for the Louis Comfort Tiffany Foundation Award, a Bombay Sapphire Award Nomination for 'Excellence in Glass' as well as the Hans Godo Frabel Award.

Zora Palova (Randall Chair ’16) was born in Bratislava, Czechoslovakia, in 1947. She studied at the Academy of Fine Arts, Bratislava, specializing in painting and later in glass and architecture. She became President of the Association of Applied Arts and Designers in 1995 and Research Professor at the University of Sunderland in 1996.

Michael Rogers (Artistic Associate), recently retired as Professor in the Studio Arts Glass Program at the Rochester Institute of Technology, New York. Previously he returned to the United States after spending eleven years in Japan where he was head of Glass at Aichi University.

Anjali Srinivasan’s, BFA ’02, studio processes focus on developing ways to discover, access and restructure information held in a material. She is currently invested in notions of "biological craftsmanship". She lives and works between India and the United States, as Assistant Professor at Massachusetts College of Art and Design, Boston, and Director at ChoChoMa Studios, Bangalore. 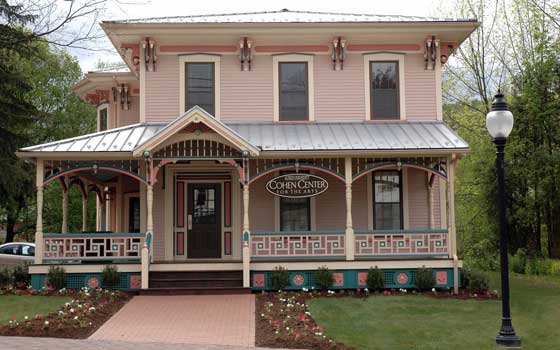 Cohen Center for the Arts

Once a fraternity house, this turn-of-the-century Victorian house was converted to an art gallery on the first floor, Cohen Gallery, with apartments for visiting artists and faculty members on the second floor. In a newly constructed building behind the house is Cohen Studios, housing Freshman Foundation studios and wide-open, flexible spaces for various projects.